The unions ratify with the Treasury the salary increase for officials 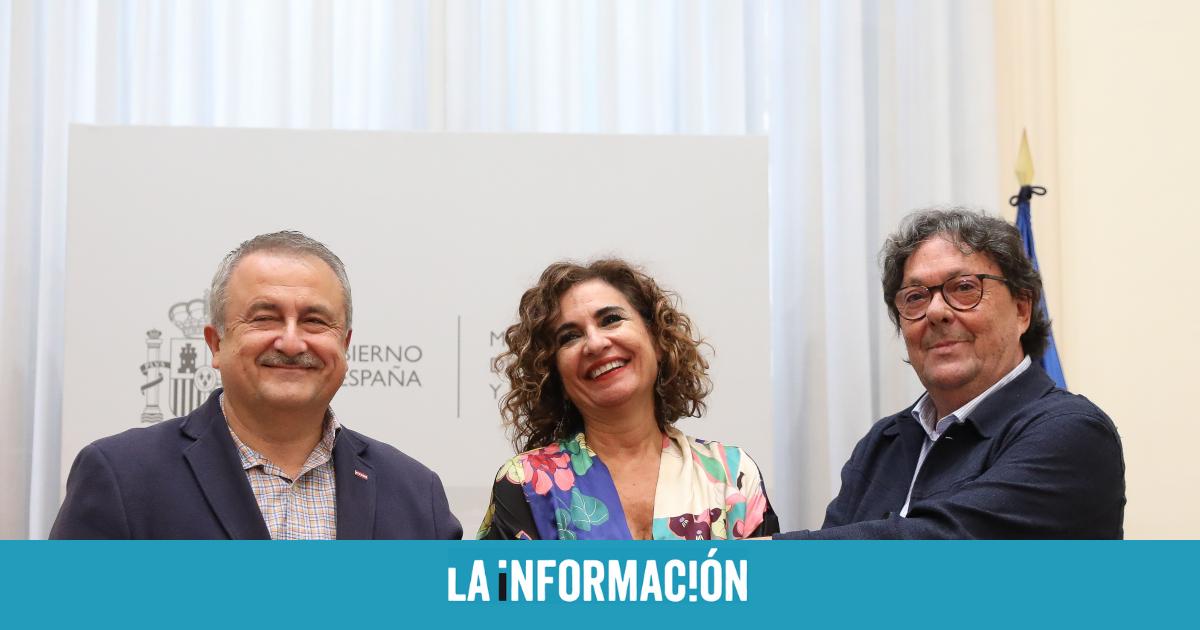 CCOO and UGT have signed with the Minister of Finance and Public Function, María Jesús Montero, the Framework Agreement for a 21st Century Administration, reached a few weeks ago and which includes a salary increase of 9.5% between 2022 and 2024 for employees public. The agreement also includes labor improvements, such as the 35-hour work week, the obligation of regulatory change to establish Equality Plans in all Public Administrations or the repeal of cuts. The coordinator of the Public Area of ​​CCOO, Humberto Munoz Beltranhas highlighted that the agreement “recovers social dialogue and collective bargaining in the field of Public Administrations” and has valued that it has been possible to reach “a very difficult context”.

“This agreement comes to alleviate this situation. It also marks a path before some employers’ associations closed to dialogue that seekonce again, that the way out of the crisis pivots on the wages of the workers without touching the benefits”, he declared after the signing. For his part, the general secretary of UGT Servicios Públicos, Julio La cuerda, agreed that the The agreement will serve to “significantly amortize the negative effects of inflation”. “In regulatory matters, it meets the concerns and wishes of most of the almost three million public employees of our country”, he added. In addition, La cuerda thanked the Government for choosing to revise the salaries of public employees upwards instead of cutting them in a context of crisis.

The unions and the Treasury agreed on a salary increase of 9.5% between 2022 and 2024. The employees public will receive a retroactive 1.5% increase in 2022, which will be added to the 2% that they have already received throughout this year and that appeared in the General State Budget (PGE) for this year. In total, the salary improvement in 2022 will have been 3.5% The Council of Ministers approved this Tuesday that retroactive rise of 1.5%, which will be paid as an additional payment in November. However, the autonomous communities and local entities will have a moratorium until December and, exceptionally, until March 2023.

The payrolls of public employees will rise in 2023 by a fixed 2.5%, with the possibility of two variable increases, of 0.5% each. The first will apply if the Harmonized CPI for 2022 and 2023 exceeds 6% and would be collected in February, retroactively and consolidatable. The second variable of 0.5% for 2023 would operate if the nominal GDP in 2023 exceeds that forecast by the Government. By 2024, civil servants’ salaries will have a 2% increase, with a variable of 0.5% if the harmonized CPI for 2022, 2023 and 2024 exceeds 8%. Again, it would be charged retroactively and consolidated.

Apart from the salary improvements, the unions and the Government have also included changes in the working conditions of public employees in the text of the agreement. The unions highlight the 35-hour weekly working day, with the elimination of the current limitations so that each Public Administration can establish it, after collective bargaining. The third provision of the Consolidated Text of the Basic Statute of Public Employees (Trebep) is also considered completed, with the full application of the personnel classification to the Public Administration service of article 76 of the Trebep. The agreement establishes the creation of a working group of the Administration and the signatory unions so that the aforementioned professional classification is implemented throughout 2023.

Both parties have also agreed to repeal the cuts implemented in 2012 and the repeal of the suppression of partial retirement for civil servants. In addition, plans will be developed and negotiated Equality in all Public Administrations, as well as the implementation of sexual and gender-based harassment protocols. Another point of the agreement is digitization and social dialogue, with the guarantee of maintaining face-to-face attention. A specific digitization plan will also be carried out in areas with a smaller and more dispersed population.

In addition, in its intention to modernize the Public Administration, it will also seek to attract and retain talent, recover lost public employment and rejuvenate the workforce. This includes the commitment to reduce temporary employment in public employment. The text also alludes to the extension of the measures foreseen in this Agreement to public sector staff institutional and the start-up of teleworking, as well as the processing and negotiation of the full content of the Public Function Law of the State Administration.

Trade unions and the Government also agreed to recognize the full right to collective bargaining and salary updating of labor personnel in the foreign service (PLEX), the updating of travel expenses for service provision, the review of the model organization and classification of penitentiary centers, and new protocol for sexual harassment and review of the sanctioning system in the General State Administration. Both parties will create a Monitoring Commission to evaluate compliance with the agreement.

Escrivá announces 102,000 more jobs in October despite the “uncertain environment”