The bank says no to the deposit war in Spain 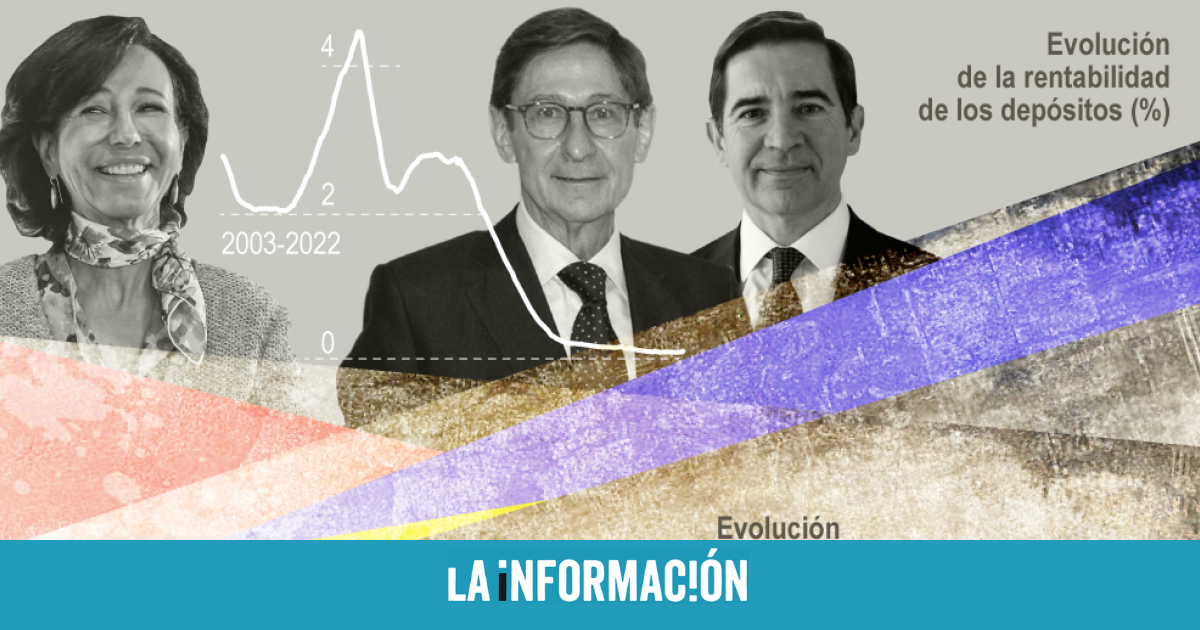 At the end of the season for the presentation of quarterly results of the large Spanish banks, all of them have made it clear that there will not be a war to attract deposits, which suggests that the profitability of this product will continue to be unattractive, even though he European Central Bank (ECB) has announced a new rise in interest rates and all the heavyweights of the Ibex bank that have published quarterly figures in the last week –Santander Bank, Sabadell Bank, caixabank and the BBVA– take for granted that increases will continue until next summer.

All of them have shown, to a greater or lesser extent, opposed to increasing the remuneration of deposits, which are at profitability levels close to zero. According to data from the Bank of Spain for the month of August, deposits on outstanding balances with a term of more than two years are the ones offering the highest return, with 0.26%, while the weighted average rate stands at 0.06%.

This situation contrasts with the large savings that households have deposited in financial institutions, which accumulate nearly 1 billion euros ‘dead’ in current accounts and deposits. But the financial entities do not seem willing to recover the remuneration of the past –A decade ago, outstanding balances in deposits offered an average return of 2.694%-, not even though the ECB is somehow inviting them to do so with the change of foot in its monetary policy. Luis de Guindos, Vice President of the ECB, has even urged clients to ask their financial institutions to give them a return on their money.

One of the clearest voices in this regard has been that of CEO of BBVA, Onur Genç, who recalled that over the last decade, these products have generated losses for banks by having to deposit them with the ECB at negative rates, although they are now becoming profitable again. In his analysis, he has pointed out that the price of deposits depends largely on the liquidity of the system, which is now “very high”so he does not believe that there will be pressure on these prices in the short term.

BBVA rules out that the remuneration of deposits is part of its commercial strategy, especially with high liquidity

“Despite the fact that a modification of the TLTRO conditions was announced yesterday, there is still a lot of liquidity in the system, so I think that this war for deposits is not going to take place,” he said this Friday. BBVA’s CEO also confirmed that they will not opt ​​for that strategy to attract new customers: “we will not go for that deposit segment”, highlighting that its strategy is based on “creating a relationship with customers” through its digital model, “not just that customer who comes if I offer him a higher deposit”.

caixabank stands on a similar line. His CEO, Gonzalo Gortazar, does not consider that deposits are “the best” of the savings instruments currently on the market. “There are other alternatives with better yields that can give a better result,” she said during the results presentation. The CEO of the entity with the highest share of deposits in Spain (25%) believes that there are other more attractive instruments, such as fundsalthough he does not rule out consolidating the products “as interest rates rise.”

For his part, the CEO of Banco Sabadell, César González-Buenopoints out that the fact that the cost of the asset rises more than the remuneration of the liability is due to the fact that “we come from an exceptional situation” which has forced restructuring, since “bank liabilities cost 50 basis points and continued to provide services for which they charged less than their real cost.” But now that he recognizes that the situation is being corrected, he did not dare to claiming to be the first to throw the stone, because the moment one of the heavyweights in the sector takes the plunge, the wheel will begin to turn and the logical thing to do -given that the Spanish market is very competitive- is that the rest will too. make.

Santander Bankwhose market share in Spain rises to 20% of deposits after the acquisition of Popular, considers that having an excess of these over loans “offers significant firepower” in the face of rate hikes. His CEO, Jose Antonio Alvarezconsiders that this remuneration “will evolve over time” and recalled that in recent years, while interest rates were negative, deposits with a short-term temporary perspective disappeared.

This situation would have forced the entities to look for alternatives for their clients and the funds were erected as a solution, which is maintained. Banco Santander, for example, has been offering monetary products for some time, which with the change in interest rate perspectives would now be offering returns of 2%. Gonzalo Gortázar, CEO of Caixabank, He also pointed them out as an alternative for customers, although the bank wins with the change. While remunerating deposits requires them to pay interest, channeling money to funds benefits them because it allows them to receive management fees. Income that has been key to keeping the income statements alive over the last few years and has continued to strengthen its numbers until September.

Thus, the large Spanish banks obtained a combined net profit of 16,014 million euros during the first nine months of this year, data that improves by 32% its figures for the same period of the previous year. Santander leads this group with 7,316 million euros in accumulated annual profit, followed by BBVA, which earned 4,842 million through September. Behind are Caixabank, with a profit of 2,457 million euros; Banco Sabadell, with 709 million; Bankinter, with a profit of 430 million and Unicaja, which closes the group with a positive result of 260 million.

The PSOE proposes in the PGE to reduce contributions in Cuenca, Soria and Teruel

eDreams loses its second largest shareholder after the departure of Ardian