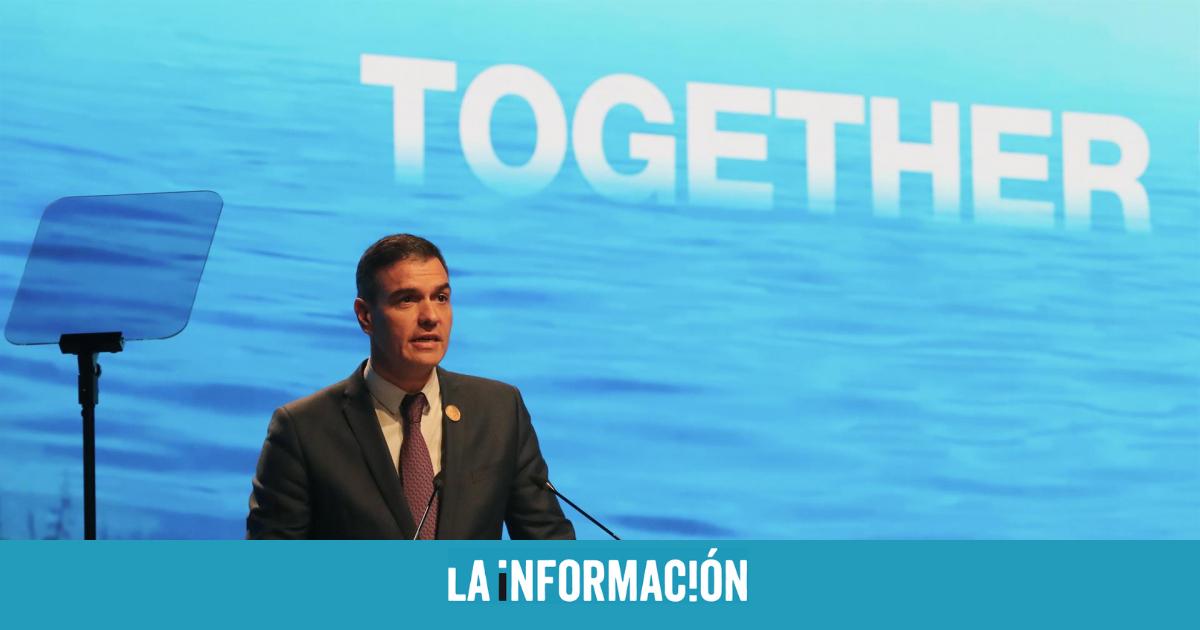 Pedro Sánchez, the President of the Government, has announced as part of Spain’s commitment in the fight against climate change, the contribution of 30 million euros additional to Adaptation Fund. Regarding the political duty of the members in this fight, the president has requested before the Summit of Leaders of the COP27 he has asked that the energy crisis caused by the war in Ukraine not be used as an excuse to relegate it or “miss the given word”.

In his speech at the Summit, with which the agenda was closed on its only day at the climate summit in Egypt, Sánchez explained that, on the contrary, the crisis must be “a motivation to accelerate the ecological transition” and has said that this is how it is being seen from the European Union.

Sánchez has asked to respond to climate change with a ambitious agendabecause “Our lives are in it”and has assured that the leaders participating in the COP27 have “the moral requirement to act with determination and a firm step” and that Spain will be “at the height” to move forward on that shared path.

In his opinion, only “maximum political commitment” will be able to respond to the challenge of climate change and it is essential to come out of lethargy and act with the determination demanded by young people around the world “from a new internationalism of progress” that crosses borders.

Fifty adhesions to the drought alliance

As part of this commitment, Spain will promote with 5 million euros the start-up of the International Alliance for Resilience to Drought, promoted jointly with Senegal, announced Sánchez. This agreement, to which some thirty countries have already adhered, including the United States and China, and some twenty organizations, seeks to raise the need to take measures to adapt and be able to face up to the political agenda. future droughtsas well as sharing knowledge to achieve it.

Government sources have described success for Spanish diplomacy that the United States and China coincide in the same alliance, and they have underlined that since the start of COP27 two days ago, the adhered countries have gone from 18 to 29. Additionally, Spain will allocate €3 million for the Systematic Observation Mechanism of the World Meteorological Organization and 2 million to the Santiago Network, created to channel technical assistance from organizations and experts to vulnerable countries.

Spain as a global ‘hub’ of sustainable fuels

Sánchez has also participated in a just transition table to explain the process of closing the coal mines in Spain, agreed with companies and unions and which has aroused interest among countries seeking to decarbonize their economy. In addition, he has attended the launch of the “Green Shipping Challenge”an initiative promoted by the United States and Norway to promote the decarbonization of maritime transport and to which they ask that both governments and companies join.

The “challenge” has been presented by the United States Special Envoy for Climate, John Kerryand the Norwegian Prime Minister, Jonas Gahr Storeto whom Sánchez defended that Spain can contribute significantly to the development of sustainable fuels due to its geographical location, its renewable potential and the know-how of its industry.

“World leading companies such as Cepsa or Maersk have chosen Spain as a center for the production of green fuels, such as e-methanol or ammonia, from hydrogen”, the President of the Government also stressed during the meeting.

“We appreciate the opportunity to join the Green Shipping Challenge and we hope that our efforts and investments form part of the solutions to achieve a maritime industry with zero net emissions”, Sánchez asserted. Recently, it was made public that the Danish company Maersk will lead a project in Spain to produce green methanol for its fleet with a investment that the Spanish Government figures in 10,000 million euros until 2030.