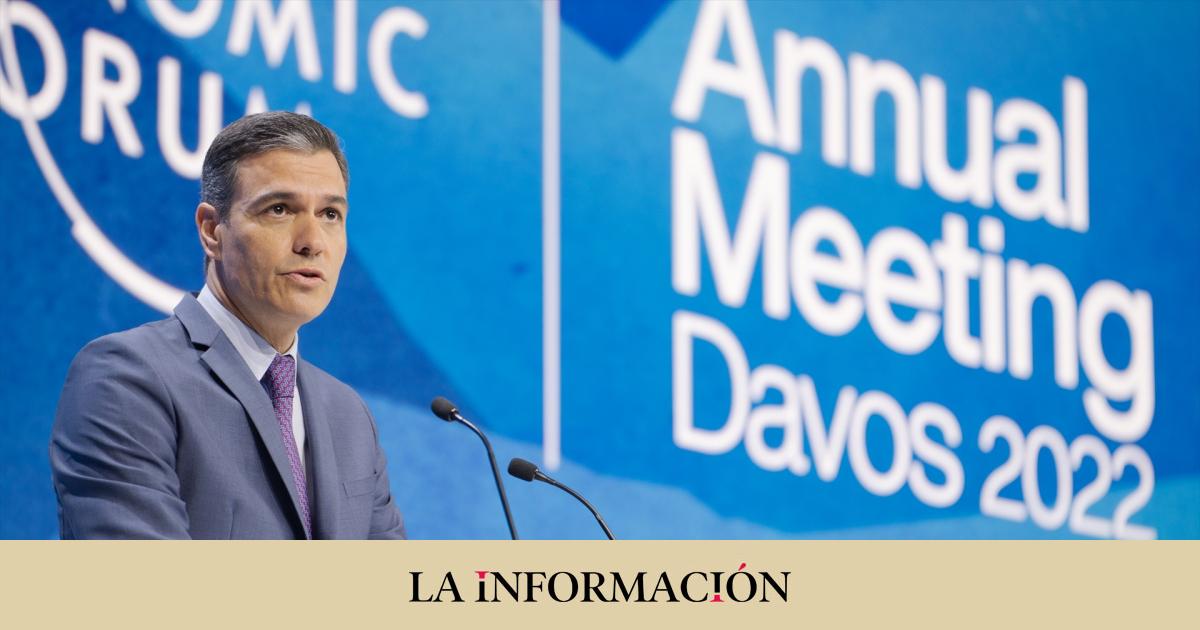 The President of the Government, Pedro Sánchez, faces his fourth participation in the Davos World Economic Forum, which will be held in Switzerland from January 16 to 20. For the leader of the Executive it will be the fourth time in which he has participated and the last in this legislature, his objective remains the same: manage to attract investment for Spain.

Davos was Sánchez’s first international appointment, in January 2020, after being sworn in as president of the current legislature a few days before and at the head of the first coalition executive in the current democratic stage. And this week will be the last time that he attends this forum in his current mandate, since in January of next year the planned general elections will have already been held. according to the Government, for next November or December.

“It is about taking advantage of the opportunity offered by a unique and contrasted forum to obtain new investments for Spain that add to those that already have had their origin there in previous contacts of the president,” executive sources told EFE.

The forum, which will be held under the motto “Cooperation in a fragmented world” and which will be marked again by the consequences of the war in Ukrainewill be held from January 16 to 20, and the head of the Government will arrive in the afternoon of the first day, although will concentrate all its agenda on Tuesday, the 17thto return to Spain the following day.

In twelve hours he will star in a series of events and meetings in which the Government affirms that will expose the good data of the Spanish economyits “strength and solvency”, its better resistance than that of other large countries to the crisis caused by the war in Ukraine, the fact that Spain is the European partner with the lowest inflation or the evolution of the labor market.

It will also highlight the role of Spain as an active member of the European Union and solutions driver in the face of specific problems such as the increase in energy prices. These are all aspects that he considers contribute to making Spain an ideal destination for investments in multiple areas.

This is how he will present it in an intervention before the plenary of the forum and in a meeting behind closed doors with CEOs of multinationals who attend the event and in which he will respond to the concerns that they raise about the economic situation in Spain.

Planned also has separate encounters with the top managers or senior managers of companies such as Dow Chemical, Arcelor Mittal, Air Liquide, Qualcomm, Envision and Maersk, and with the CEOs of two investment funds, BlackRock, considered the largest in the world, and Mubadala. There is confidence in the Government that new investments will emerge from these meetings, as they claim has already happened in Davos in the past.

Although Davos will bring together more than fifty international leaders this year and Sánchez will meet and talk with some of them, his contacts will be mainly with those responsible for multinationals and investment funds.

It will also hold a meeting with the top managers of Spanish companies and financial institutions present in the Swiss town to exchange points of view on the expectations of the forum. He will also meet with the president of the Inter-American Development Bank, Ilan Goldfajn, and with the general director of Oxfam International, Gabriela Bucher. In addition, he will attend the dinner hosted by forum host Klaus Schwab on Tuesday for participants in this year’s event.

The Davos Forum takes place again in January and face-to-face three years after the last timesince, due to the coronavirus pandemic, in 2021 it was carried out electronically and in 2022 it was postponed to May.

A report from the World Economic Forum presented this week in the run-up to the meeting in the Swiss town places Spain as the third country with the greatest deficit of employees in the social spherewhich includes the health, childcare and education sectors.