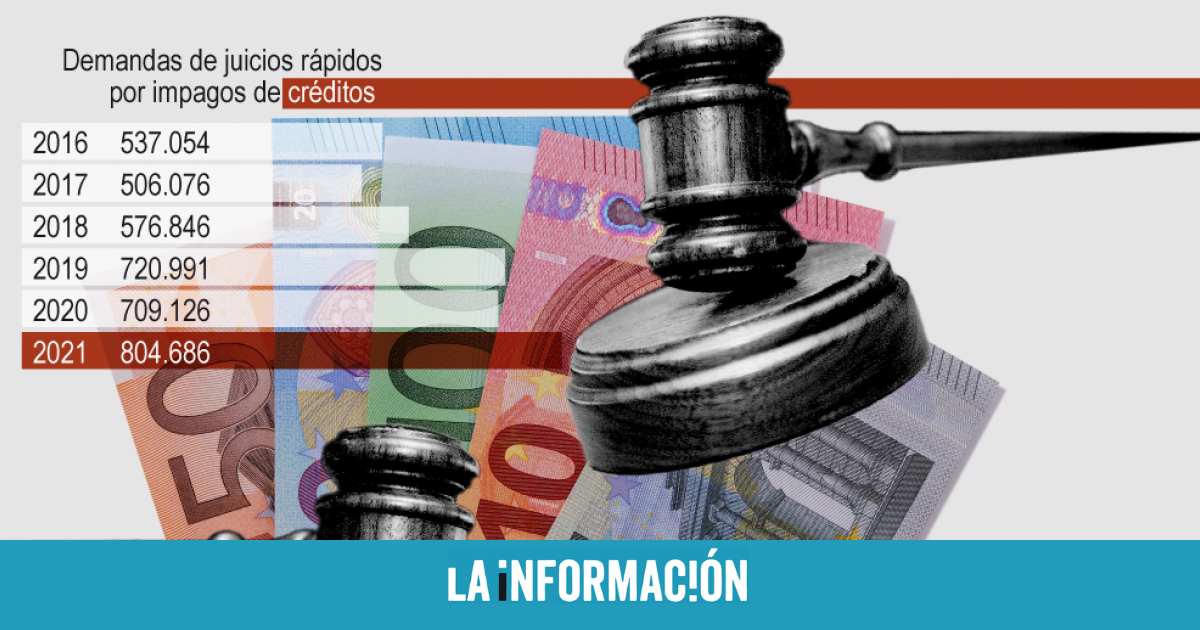 The monitoring, a specific procedure in which individuals and companies claim unpaid invoices with no limit on the amount regulated in articles 812 and following of the Law of Civil Procedure, have skyrocketed and are returning to levels similar to those of the financial crisis. In 2021, According to data from the General Council of the Judiciary (CGPJ), 804,686 were registered. It was the first time that the level of 800,000 had been exceeded since the fateful years of that economic crash that occurred in Spain between 2008 and 2014. The data, in fact, were close to those of 2009 (with 856,875) and 2010 (with 895,127), and the record could be at risk if we look at our growth rate in 2022.

Thus, during the first half of 2022, these quick trials grew by 10%, to 457,773. With the economic outlook deteriorating and inflation rising, the scenario seems prone to the figure continuing to widen. At the moment, the autonomous communities with the most significant increase are Catalonia and Aragon, with an increase of 35.5% and 12.2%, respectively. The evolution of employment will be key so that the situation does not worsen.

The weak point of consumer credit

The main focus of this type of quick trials comes from debts linked to consumption. According to sources close to the CGPJ consulted by La Información, up to 80% of the processes would be linked to defaults linked to personal loans (almost 80% according to nearby sources CGPJ), since they are the first to stop paying at the start of a cycle of increased delinquency. The rest correspond to mortgage loan default and the bankruptcy of smaller companies. In the payment orders, in general, small amount defaults are claimed for unpaid installments that would range from 500 to 1,000 euros.

Both the financial sector and the Government of Pedro Sánchezin the middle of a debate about whether the crisis that is on the horizon could lead to something similar to that of 2008, defend that the debt situation of families is much lower than then and rule out a similar blow. According to data from the Bank of Spain, at the end of September, families owed some 693,000 million, taking into account both mortgage credit and consumer loans. The latter, which are considered to have a greater risk of default, reached 178,000 million. In contrast, in January 2008, the debt of families amounted to 842,000 million.

However, in recent years there has been an acceleration in the granting of loans for uses other than home purchase. Just a decade ago, in 2012, the minimum in concession was marked in the period, with 12,800 million. In 2019 the record was signed and reached 36,237 million. Since then the figure has moderated, although it remains well above the 2012 levels. According to the Bank of Spain, during 2021 28,419 million of this type of loan were granted. Until September, some 21,900 million in new concessions had been signed.

One loan after another

Although indebtedness is lower than in the financial crisisthe rise in interest rates and the increase in inflation can increase the payment problems of this type of credit or those linked to the controversial revolving cards, which on average is charging interest rates of 18.01%. The debt pending payment linked to ‘plastic money’ reached 11,210 million in September; a figure higher than that of December 2021, which was 10,061 million, but also lower than the levels of 2019, when it was placed at 13,620 million.

One of the situations that occur when families are more fair to pay this type of loan, is that they seek refinancing. In a scenario of more expensive credit, this type of operation increases the total debt and, in the case of revolving, has led in some situations to causing the final debt was really difficult to pay due to the recalculation of interest.

To prevent these non-payment problems from generating an increase in foreclosures linked to the increase in the Euribor, banks and the Government are negotiating specific conditions for these groups; but consumer credit will remain on the sidelines, so it would not be saved from going to a quick trial.

Nor should we forget the impact that the crisis is having on the business fabric, which is dragging on a complicated situation after covid. Between April 2020 and June 2022, more than 21,000 contests were presented, according to data from the CGPJ. Only in 2021 the figure exceeded 10,000. Most of them correspond to companies with less than ten employees, which are always more fragile in crises.

The restoration prepares the first Christmas without restrictions in three years