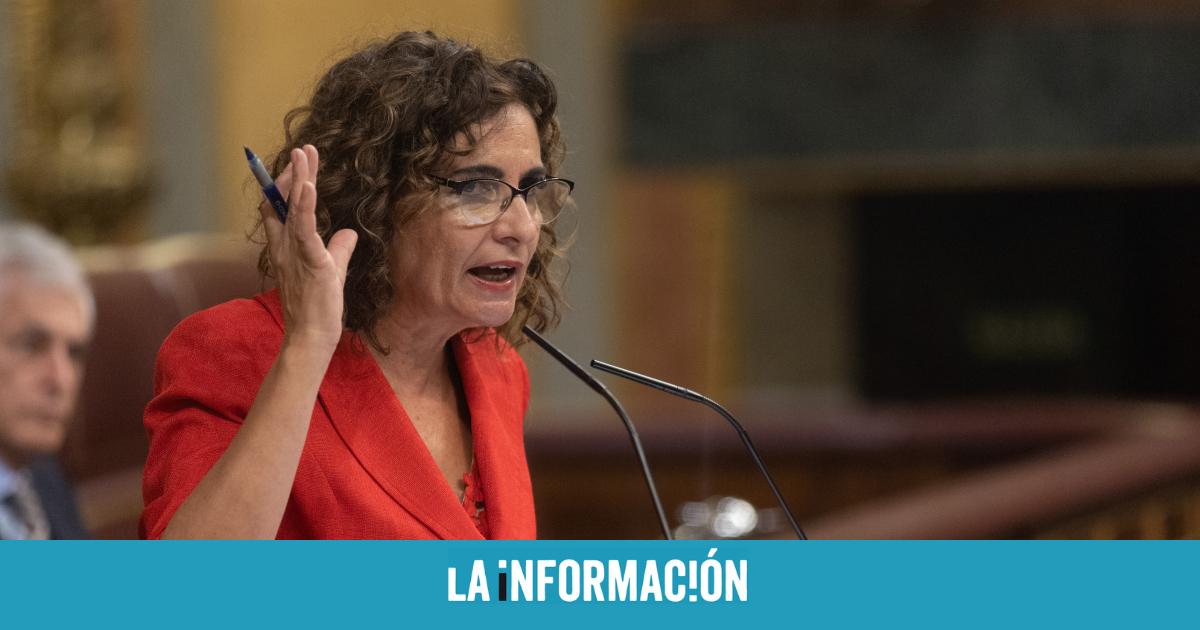 After a long day of debate in the Congress of Deputies, the Minister of Finance, Maria Jesus Montero has assured that “it is going to reach out to everyone” to negotiate some Budgets that will serve to “accompany the social majority” in a difficult context due to high inflation. However, the opposition has branded the accounts as unreal and wasteful.

In the defense in Congress of the 2023 budget project, which faces seven amendments of all of PP, Vox, Ciudadanos, JxCAT, Foro Asturias, the CUP and deputies expelled from UPNMontero has charged against the groups that instead of make a “constructive” opposition They try to “delegitimize” the government, an attitude that, he has assured, “damages” democracy and politics.

The welfare state, he stressed, is not “a superfluous expense” but rather “social justice” and “economic efficiency” because “The wealth of a country is created by all its citizens, not an economic elite”. Montero has also defended the revaluation of pensions with inflation because “there is nothing that threatens equity more than impoverishing those who do not have room to fight inflation”, and has made ugly that “trying to confront young and old is not serious, it’s petty.”

The PP spokeswoman in Congress, Cuca Gamarra, has demanded the return of some accounts that, in her opinion, “have been invalidated before coming into force” because they are based on macroeconomic forecasts that do not adjust to reality and suffer from “shortcomings and weaknesses”.

“The Budgets have been invalidated before coming into force”

Gamarra has accused the Government of wanting to buy his “survival on everyone’s money”a criticism that Montero has considered “lack of respect” for suggesting that citizens “let themselves be carried away by siren songs.”

The increase in spending and the debt of the accounts convert the budgets, according to the PP, into the “general mortgages of the State”, but for the minister “there is no greater mortgage than a PP government”, which created a “tax on the sun “and raised” practically all taxes.

Montero appeals for support for the Budgets

The Vox spokespersonIván Espinosa de los Monteros, has dedicated part of the debate to reproach the PSOE for its policy of democratic memory and to remember the victims of ETA, raising the tone by affirming that “the PSOE has a criminal past” and that they still do not know “if some of the deputies of this chamber are guilty of murder”.

Montero has reminded him that ETA was defeated 11 years ago with a socialist government and has assured that the budgets “are a vaccine against populism.” Regarding the budgets, Espinosa de los Monteros has said that they will leave a “very serious” problem for future generations, because the government “is suffocating the Spanish to indulge in ideological whims.”

JxCat and the CUP ask for gestures with Catalonia

The Junts spokesperson in Congress, Míriam Nogueras, began the debate by asking the Government “where is the amnesty and the dejudicialization of the Catalan process”. “Is this one more story of yours?”affirmed Nogueras, who has made part of his speech in Catalan in defense of that language and who has also accused the Government of being to the right and of “use sedition like chrome”.

The CUP spokesman, Albert Botran, has criticized the lack of solutions to the conflict in Catalonia and has said that in order to have socially transformative budgets, a better distribution of wealth, price control and housing policies against speculation, instead of increasing the defense budget by 26%“the most shameful”, in his opinion, of the public accounts.

The leader of Citizens, Ines Arrimadashas criticized the spending waste of some budgets that are mostly used to pay pensions and interest on the debt, and has considered it outrageous that around 19,000 million are allocated to revalue all pensions linearly, when part of that money could be used to promote the birth rate.

Montero has made him ugly that he wants to generate a generational confrontation between grandparents and grandchildrenand has reminded him that Ciudadanos voted that pensions be revalued with inflation in the parliamentary commission of the Toledo Pact.

The former UPN deputy, now in the mixed groupCarlos Garcia Adanero , has affirmed that the budgets will go ahead due to the blackmail of the independentists, criticism to which the spokesman for Foro Asturias, Isidro Martínez Oblanca, has added. Both have also reproached the Government for the deficit in the execution of investment in infrastructures in their territories.

Garamendi advocates not losing purchasing power, but with solvent companies