Interim teachers are entitled to paid vacations and voluntary leave 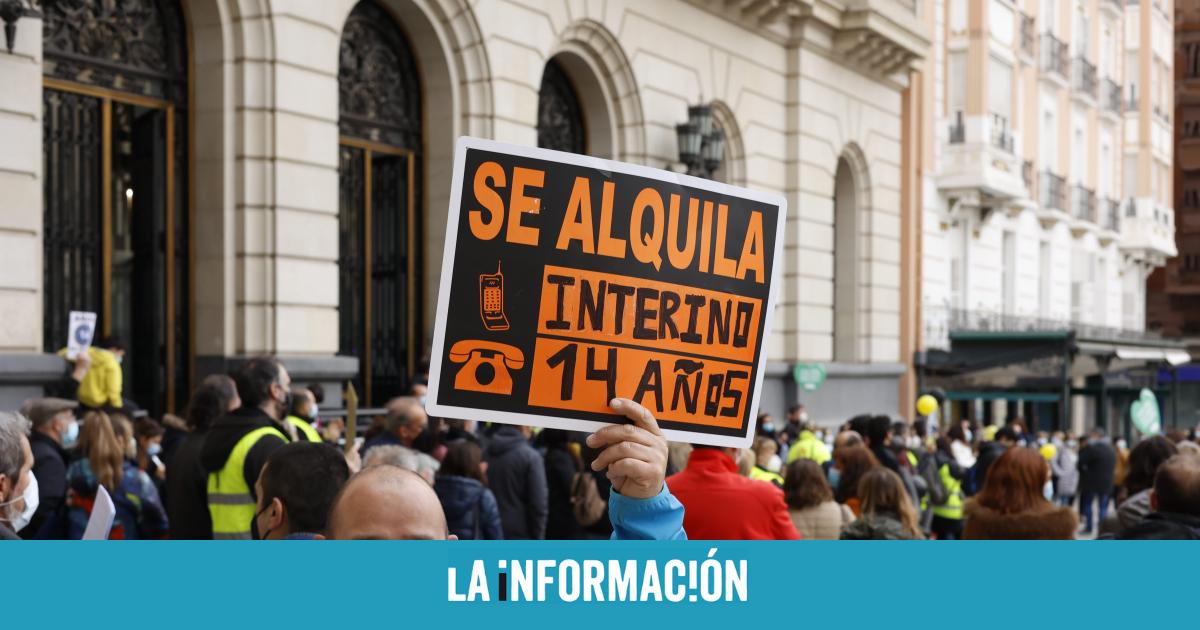 The Contentious-Administrative Chamber of the supreme court has recently ruled on two of the issues that most concern, in addition to the consolidation of its seats, the interim officials, those public employees who temporarily fill the positions that are to be filled by career officials, and who often end up in court. The rulings, made public on October 17 and 24 (15 rulings on the same matter), rule on the voluntary leave of absence of these workers and on the right of teachers to be paid vacations in the event that they cease before summer , an issue that has already been resolved by high court previously.

Last day 17, the Courtroom of the TS issued a relevant rulingbased on a cassation appeal from the State administration, in which it clarified that interim civil servants, even those who have been covering a position in the Administration for years, do not have the right to voluntary leaves of absence for personal reasons, which career civil servants can enjoy after five years in the position. With his resolution, the high court intended to mark the ground for the first instances, more favorable to interims when it comes to ruling on cases of alleged discrimination.

While it seemed logical that an interim official who has been assigned a short replacement could not benefit from a voluntary leave, a right that is contemplated only for the owner of the place, it did not seem so clear that those who already have it practically consolidated after years and even decades in the Administration could not enjoy this option. The Supreme indicates, after a decision of the High Court of Justice of the Valencian Community favorable to a public employee who had been interim for more than seven years, that there is no discrimination with respect to career civil servants, mainly due to the duration of their contracts, which in the case of interim workers can be terminated for different reasons. He also pointed out the differences between a voluntary leave of absence for personal reasons and for special services.

What does the European Union say about interim discrimination

The TSJ of the Valencian Community in its resolution of September 16, 2020 supported its decision in a recent judgment of the Court of Justice of the European Union, in which the non-discrimination of interims for non-objective reasons was defended. However, the Supreme Court understands that in this case, regarding an interim worker who provides his services in a prison in Castellón, that there are objective causes for the differentiation, based fundamentally on the temporary duration of the contracts, and annuls the judgment of the Valencian court. The Third Chamber of the TS concludes that the voluntary leave of absence for personal interest provided for in the article 89.2 of the Basic Statute of the Public Employee It does not apply to interim officials.

Interim workers dismissed in the summer are entitled to vacations

The other judgments of the Contentious-Administrative Chamber of the supreme courtwhich are dated October 24, consolidate the previous jurisprudence and certify that the interim they are not entitled to vacation pay if they stop before the summer. The main affected by these failures are the teachers, who are usually dismissed before the holidays begin and are hired again in September. After resolutions of the first instance and on appeal in which the professors are right, the Supreme Court ratifies the position maintained in numerous previous sentences and admits the appeals of the Community of Madrid, annulling the resolutions of the Superior Court of Justice of Madrid.

The High Court highlights and analyzes its judgment of July 9, 2019 on this matter, in which it established jurisprudential doctrine: “[…] dismissal of teaching staff Interim Teaching Corps non-university students at the end of the school year, based solely on the fact that in the two remaining months of the school year (July and August) the need and urgency that motivated their appointment disappears, does not entail unjustified unequal treatment with respect to permanent or career teaching officials”. Their decision is based on the jurisprudence of the Court of Justice of the European Unionwhich understands dismissals to be compatible and endorses using services for an indefinite period of time and also for fixed-term service relationships.

For the Supreme Court, the choice of a fixed-term service relationship derives solely from an objective reason, the introduction of new organizational measures in the provision of the public service of education, particularly in the genuinely teaching activity, also aimed at achieving an objective of equally relevant public interest, how is the public deficit reductionand established in a rule of legal rank, such as the budgetary provisions with the rank of law referred to by the appellant Administration.

How the Supreme justifies the different treatment of interims

“This choice of a particular service relationship justifies a differential treatment between teachersdepending on whether they are interim civil servants or career civil servants, given that the service relationship of the interested party ended on certain dates, like that of the other interim teachers, that is, in those in which the needs ended. classes of the school year and, therefore, the extinction of the causes that determined their appointment, which was also foreseen in their appointments in an objective and predetermined manner, while that of teachers who were career civil servants was maintained after said date , corresponding to the same perform all administrative and organizational tasks they are specific to the non-teaching period of the school year, and are established in the regulatory orders for the programming of successive school years.

Heating with gas, electricity, pellet, diesel or split radiators. Which system is the cheapest?