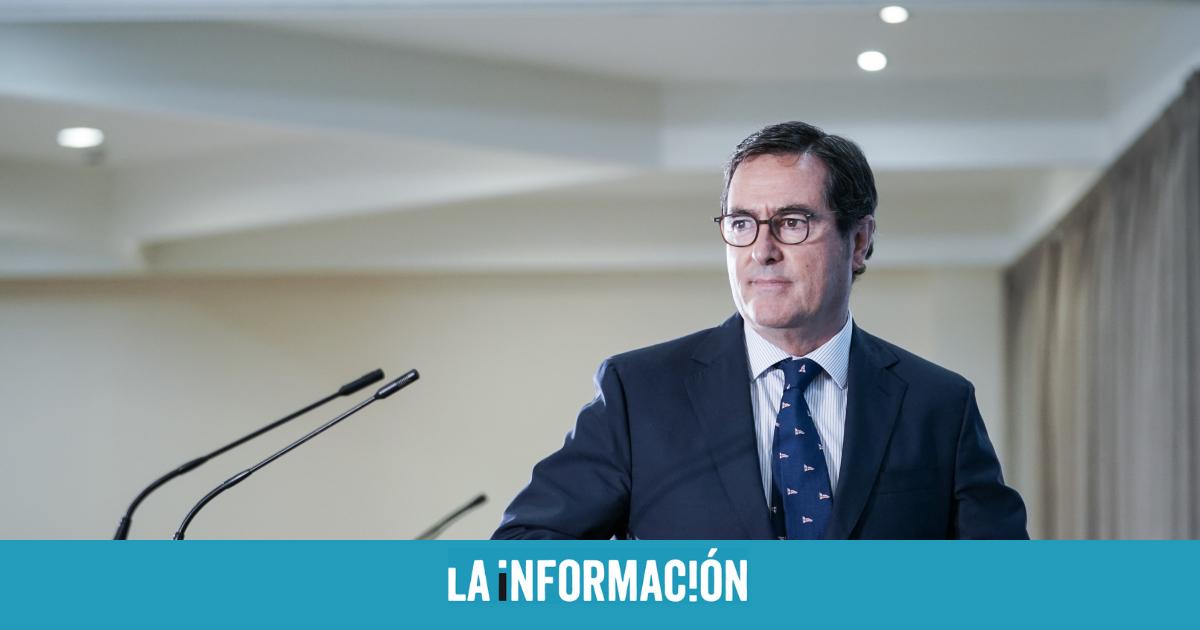 The president of the CEOE, Antonio Garamendi, sees it as “complicated” to reach an agreement with the Government and the unions on the reform of the pension system before the end of the year, in order to fulfill the Executive’s commitment to Brussels. Garamendi assured this Friday, in an interview on RNE’s ‘Las Mañanas’, collected by ‘Europa Press’, that the The employer has not yet received “any paper” of the Ministry of Inclusion, Social Security and Migrations. “It worries me. I think that the issue of pensions, which is a very serious issue, is not so much a problem of saying what happens this year as saying what we have to do to make this sustainable”, commented the president of the entrepreneurs.

Garamendi has insisted that all the parties, and not only the Government and the social agents, should “talk seriously and openly” of the sustainability of the pension system to do “things right”. In his opinion, the Toledo Pact has to sit down to “bell the cat” and address issues such as years of contribution, mortality tables or the sustainability factor. “I am in the ‘baby boom’ (generation born between the late 1950s until the 1970s), but I am concerned about the ‘babies’, who are my children, the next generations, who must also have the right to retire. That is Spain and that is what the Constitution commands us,” Garamendi explained.

The Ministry of Labor and Social Economy will convene in a few weeks the social agents for negotiate the Minimum Interprofessional Wage (SMI) by 2023. The Government and the unions share the intention of raising the SMI and, specifically, the Executive aspires to fulfill its commitment to set the SMI of 2023 at 60% of the average Spanish salary. The president of the CEOE believes that the Labor approach “is not real” and is opposed to indexing it to the CPI to avoid generating “the famous second-round inflation.”

“I’m not saying that it doesn’t go up,” clarified Garamendi, who has been in favor of reviewing the SMI according to the sector and territory. Furthermore, he has recalled that the law establishes that it is the Government the one set by the SMI, after consultation with the social agents. Article 27 of the Workers’ Statute also states that the CPI must be taken into account, the average national productivity achieved, the increase in labor participation in national income and the overall economic situation.

Garamendi has also reproached the Government for demanding an increase in the SMI from employers while public contracts do not include this indexation. The CEOE and the unions have pending since May the negotiation of the Agreement for Employment and Collective Bargaining (AENC), although Garamendi has downplayed this issue and has stressed that collective agreements “are advancing” and that they have “regulatory status”.

The president of the businessmen has stressed that the AENC and the income agreement are not synonymous and has warned that the term “is deteriorating”. For Garamendi, the income agreement must also include civil servants, pensions, SMI and AENC. Despite the cooling of relations with the unions in the recent months, the president of the CEOE, who also spoke this Friday on TVE’s ‘La Hora de La1’, thanked them for their work in social dialogue and their contribution to “social peace that makes the country work”. “We will continue working on this social dialogue, which is key for this to work,” he guaranteed.

Lack of orthodoxy in the PGE

On the evolution of the economy, the president of the businessmen does not rule out that Spain accumulates “a couple of negative quarters”, although it has avoided “the word recession”. Garamendi forecasts “lean years” in the coming months and considers that the General State Budgets (PGE) for 2023, approved Thursday afternoon in Congress, are not designed to deal with these situations.

“We are not sharing these budgets”, he stressed, while recalling that public debt amounts to 117% and that interest rates they could continue to rise up to 2.5%. The president of the CEOE describes these budgets as “expansive” at a time that, in his opinion, requires “righting the ship” to face the coming years with “budgetary rigor, more economic orthodoxy and more realism.”

Garamendi has also been in favor of companies appealing bank and energy taxes to the courts and believes that it is “totally logical” that they opt for that route. Regarding doubts about the validity of the fuel subsidy beyond December, the president of the CEOE advocates evaluating the impact of this measure to help “people who need it” and do not convert these bonuses in capital gains.

In his opinion, these subsidies would have to be “selective and temporary”, because making them “generic and forever” would be “a mistake”. “I think it will be reviewed Which are the sectors that do have a lot of influence? this issue, as carriers or logistics, makes perfect sense”, he expressed. Asked about the paid leave of five days a year for workers for the care of cohabitants that will include the Family Law, Garamendi He has recognized that “as a citizen” “everything that is conciliation of family life and help to the family” seems good to him.

However, as a businessman, he lacks a prior consultation by the Government to find out what is being talked about and how it will be applied. “I don’t think it’s right that the government says: what a good size I have and you pay for it. I am the first to support it, but it is not worth saying yes, but you pay for it. It would be necessary to see how the State compensates the companies for this payment, what must be done on those days, which are days when work is stopped, with what it can mean, “said the president of the CEOE.

Garamendi achieved re-election this Wednesday for a second term at the head of the CEOE. The Basque businessman prevailed by 534 votes over his opponent, the vice president of Foment del Treball, Virginia Guinda, who obtained 87. “This It’s not my success, it’s everyone’s success. that have endorsed how we have worked during these years that have been very complicated”, he explained. For the president of the CEOE, this result supports the line of work, “firmly but with moderation”, that he has marked in his first four years of mandate In the next four, he will continue “Wanting to help and add” to continue “serving companies”.

“Complicated years are coming. We have to put our batteries together because more complicated situations are coming. We are going to have an economic situation more difficult and I think it is important that society as a whole is united”, asked Garamendi. The president of the Spanish businessmen said that for the moment It is proposed to modify the CEOE Statuteswho limit the presidency to two terms, and recalled that he has never been “more than eight years in the sites.”