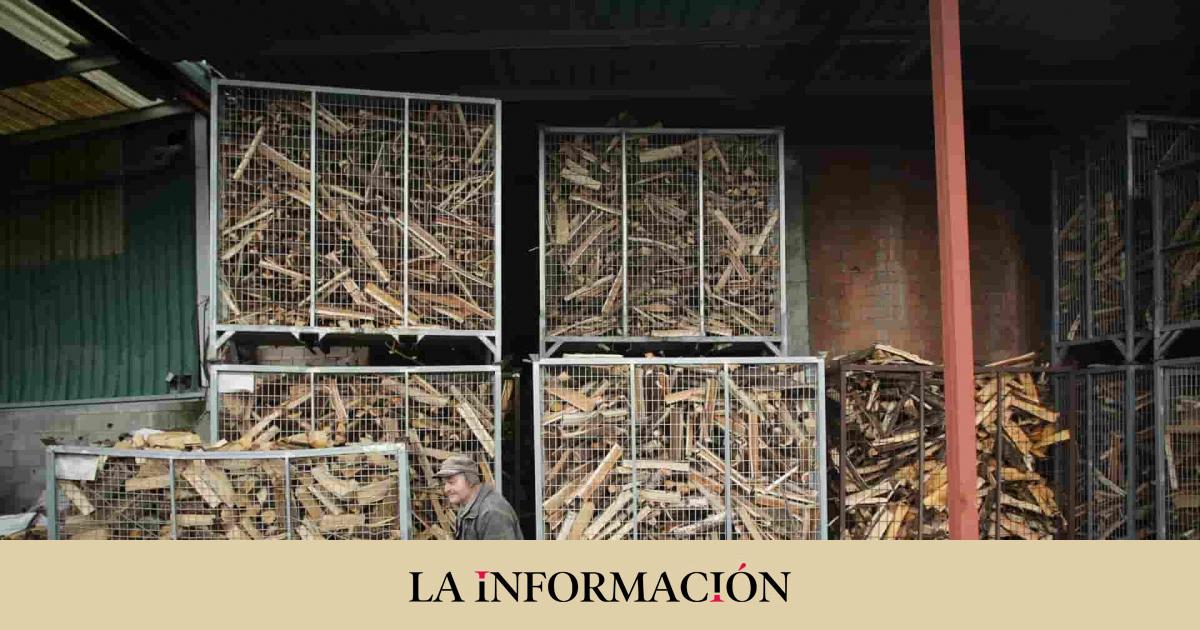 Since the war broke out in Ukraine with the start of the invasion by the Kremlin, the prices of electricity and gas have not stopped rising. Faced with this uncontrolled rise, many Spaniards have decided to change their energy source to heat their home. This winter, firewood has regained some prominence as a source for heating homes, driven by the rising cost of gas and electricitywhich in turn has caused a rise in prices that is difficult to quantify in a particularly diffuse and fragmented market.

Although the heating that is fed by natural gas and electricity are the predominant ones, at the end of 2021 a park of biomass stoves and boilers -pellets, chips, bone, firewood and other biofuels- was operating in Spain. more than 513,000 unitsaccording to figures from the Spanish Biomass Association (Avebiom).

In the specific case of firewood, it is a source of heating that generates a business difficult to quantifysince it is a sector “very fragmented and with complicated access to information,” explains the president of the association, Javier Díaz, to EFE.

There is no doubt in any case that in the last year, fueled perhaps by the record prices of other fuels as a result, above all, of the Russian invasion of the Ukraine, the price of this fuel “it’s gone up quite a bitalthough not as much as electrical energy,” he points out.

In fact, the Organization of Consumers and Users (OCU) encrypted at the beginning of October in a 30% rise in the price of firewood in Spain with respect to 2021 and several companies now consulted by EFE corroborate this increase, despite the extension of the VAT reduction from 21 to 5% that the Government approved in 2022 and that will be maintained in 2023.

“The price has gone up 20% because of the high demand and the psychosis that has been caused since August”, sums up Roberto, manager of Leñas Ricosan, a company that sells and distributes firewood throughout Spain from Segovia.

A rise that Alfonso, manager of Leñas La Humosa, a family company in the Community of Madrid that also distributes in part of Castilla-La Mancha and the south of Castilla y León, figures at “about 30%, especially at sourcewhere because of the war in Ukraine they decided to keep firewood to market it themselves”.

For his part, Simó, a worker in a cooperative dedicated to forest management and the sale of firewood in the province of Girona, confirms that, from one year to the next, the price per ton of the two types of firewood that he sells (oak and mixed) has risen by 10 euros, which would mean an increase of around 5%, by “increased costs”.

In the case of Ecoleña, a company located in Úbeda (Jaén) that focuses on selling to large consumers and stockists, its manager Francisco quantifies in 50% more expensive“mainly due to the rise in costs when processing firewood, fuel and the psychosis that occurred at the beginning of the lawsuit.”

A “psychosis” in demand

All the companies consulted by EFE agree in indicating the Increased demand as one of the main causes of the price increase. In the case of Leñas Ricosan, “demand has increased by around double that of last year.”

For its part, Ecoleña says it has detected a increase in demand around 40% compared to 2021 throughout the winter, in what he considers “a good campaign”. In front of them, Alfonso (Leñas La Humosa) acknowledges that the demand increased at the beginning of the season, but later “it has gone stabilizing because it’s not cold“.

In fact, this company expects to close the season “with figures similar to those of last year”, after a December in which demand “was down a lot”. For his part, Simó believes that in rural areas the rise in demand is not a phenomenon exclusive to this year, “but it has already been increasing in recent years.”

Those who also have no doubt that the price of firewood has risen this winter are the habitual consumersas is the case of Martina, a resident of Blanes who uses this fuel to heat her second home, located in Huertahernando (Guadalajara).

In his case, he assures that two years ago he paid a kilo of dry firewood at 16 cents per kilo and that now everything he finds is “between 21 and 25 cents a kilo”. Like her, Elisa, a neighbor from Vélez-Málaga who uses firewood to heat her single-family home, assures that last year she bought the wheelbarrow olive wood for 12 euros and this year for 15 cents.

Meanwhile, Marina, a resident of a town in Cádiz who uses firewood to heat the same type of residence, has paid 50 euros for half a Land Rover of firewood, compared to 45 last year.