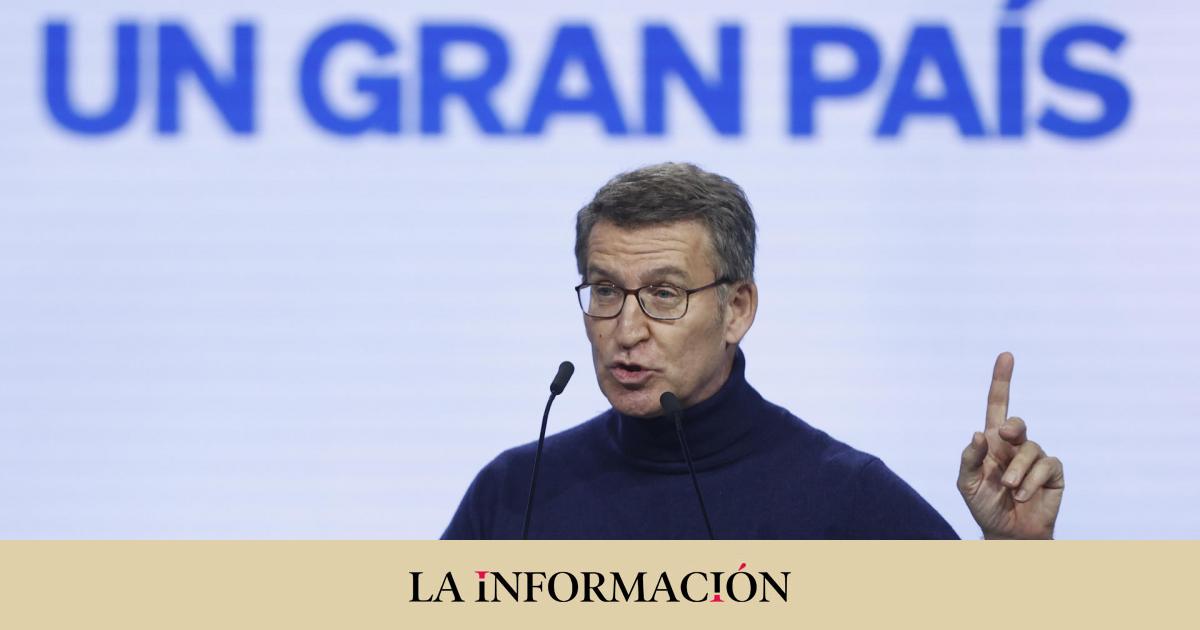 The leader of the Popular Party, Alberto Núñez Feijóo, has brought together this Sunday the ‘top’ of the party in an act where he has presented the candidates for the mayoralty of the provincial capitals for the elections on May 28. Feijóo has delivered a speech to close the meeting where he has encouraged the President of the Government, Pedro Sánchez, to include some more measure of the ‘popular’ in his anti-crisis decrees that will be voted on next Tuesday in the Congress of Deputies. Among his suggestions, it stands out to include the reduction of VAT on meat, fish and preserves, and to return to the self-employed the bonus of 20 cents per liter in the price of fuel.

Núñez Feijóo has surrounded himself in Madrid with the PP candidates for mayoralty in the provincial capitals in the next elections, who have conspired to be the “infantry” that with victories serves as a springboard for take the leader of the PP to the Government and put an end to “sanchismo” in the words of the mayor of Madrid, Jose Luis Martinez-Almeida. To close the act, Feijóo wanted to reinforce the fight that the opposition is making so that “prices don’t keep going up.” In his words, the Government has incorporated some ‘popular’ measures into its anti-crisis decrees, but regrets that it has not included all the Proposals to curb inflation.

The leader of the PP has assured that from his party will vote ‘yes’ to the new anti-crisis decree if the Government includes some more proposal among four options available to you. The first of these is to maintain the VAT reduction on food and include this deduction for “meat, fish and preserves”. Feijóo has also indicated that he would see himself favorably reduce “income tax to those who earn less than 40,000 euros”, as a third option for Moncloa it proposes include the self-employed in the bonus of 20 cents in gasoline and diesel “that they did have in December, and they don’t have in January.” And finally, “lower personal income tax”, In order to “not fill with bureaucracy” the citizens to request the check of 200 to the most vulnerable families. The opposition leader reaffirms that if Sánchez accepts any of these four measures, “we will be with him.”

“The street has abandoned” Pedro Sánchez

In addition, Feijóo has taken advantage of the act to ensure that “the street has abandoned” Pedro Sánchez as, in his opinion, was evident this Saturday in the massive demonstration in Madrid that gathered thousands of people and has asked all the members of the Popular Party catch the “reveal” of the people who took to the streets asking for a “change” in the Government of Spain.

“When a politician can only go out on the street more than surrounded by a cast of militants, he has to realize that no longer connects with your country. When in the morning you realize that you do not understand what is happening in your country, it is time to leave politics,” he proclaimed.

One day after that demonstration in Madrid against the government’s policies, Feijóo has indicated that Sánchez has shown that “from the Falcon he does not see exactly what is happening in Spain” and that is why “compare the pro-independence demonstration last Thursday in Barcelona during the Spanish-French summit with which it took place this Saturday in the capital of Spain with thousands of people in the streets.

Voting for the PSOE candidates is a “gift” for Sánchez

Feijóo has criticized that the Government has “entrusted its destiny” to a “combination of propaganda and amnesia“but he has warned that there are many facts that citizens will not be able to “erase”, such as what is happening with the law, the ‘only yes is yes’ and the reductions in sentences for sexual offenders, while the Government refuses to reform that rule “We will win over propaganda with facts and arguments,” he asserted.

Furthermore, he has alluded to the criticisms dedicated to him from the PSOE, like he doesn’t know how to manage or that he is “ultra and moderate at the same time”. “If they try to discredit us, it is because they know that every day more people believe in our project. If they want to clamp down on us, it is because they know that we are about to convince the majority of Spaniards,” he stressed.

The head of the opposition has assured that the PSOE “is wrong” when it believes that “all those who have voted for it, They will continue to vote for him the same” in the elections on May 28 and has warned that a vote “lent” to the PSOE candidates will be a “gift” for Pedro Sánchez when “he does not deserve it.”