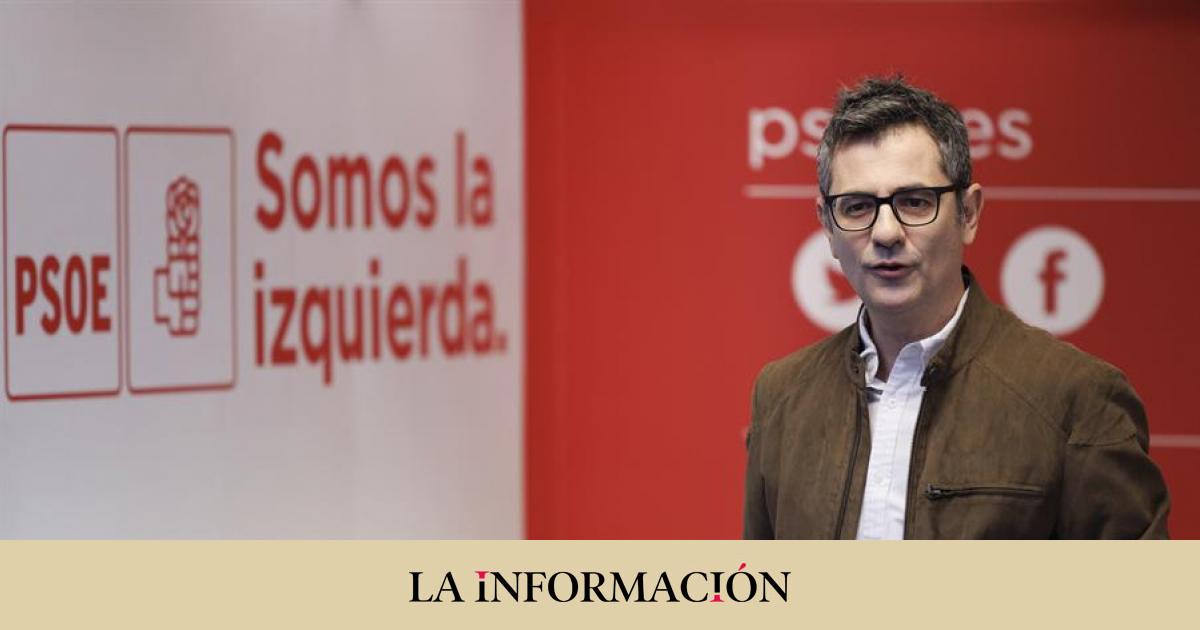 The Minister of the Presidency, Félix Bolaños, took advantage of this Sunday to make an appearance at the PSOE headquarters and puff up the government economic achievements against the bad omens and predictions of the right. After repeating that the economy will grow by 5% in “a good economic year 2022”, the minister recalled that Spain now has the lowest inflation in the Eurozone and has launched a calculation on the increase in pensions, according to which, after the revaluation with the 8.5% of CPI that has been made this year, the average pension in Spain has increased by 263 euros.

Without giving further explanations on how this calculation is made, Bolaños has presumed that it is an achievement of the PSOE that with a right-wing government would not have occurred, given that its reform was based on not updating benefits with the CPI. In his economic balance, the minister recalled that almost half a million jobs have been created last year, an economic background that he hopes will serve to face the regional and municipal elections in May in 2023, and the general ones in “November or December”, He said.

Words against the PP and Feijóo

In an impromptu appearance this Sunday, Bolaños charged against the PP and its leader, Alberto Núñez Feijóo, whom he reminded of his opposition to the “Iberian solution” for gas, which now “is copying all of Europe”, and his lack of alternatives. In addition, he accused him of “trying to sow fear” with a speech of “predictions and prophecies that will not come true”, such as the holding of an independence referendum in Catalonia, and has recommended that he carry out “an exercise in accepting reality”.

This was also expressed by the secretary of Constitutional Reform and New Rights of the Federal Executive Commission of the PSOE in statements to the media in Ferraz, where he regretted that Feijóo “continuously portends all kinds of disasters.” “Spain deserves a better opposition,” he asserted, also criticizing the fact that the PP wants “the economic and employment figures in Spain“, while the Government does reach positive aspects in this regard.

“I would recommend Mr. Feijóo an exercise in accepting reality, that he be aware that his desires are others, but that the reality is that Spain grows at 5%created half a million jobs in 2022 and has reduced inflation by five points in five months,” he added. ‘popular’ work to “block”as in the case of the blockade of the renewal of the General Council of the Judiciary (CGPJ), where the PP has “politicized justice”, has sentenced.

In this context, Bolaños has asserted that 2022 has been the year in which Feijóo “has disappointed everyone”, since he came to the PP to give it leadership, but “shows his shortcomings every day“: “It violates the Constitution and has not reached any agreement. He reached one (that of the renewal of the CGPJ), but he was not able to sign it because the most extreme elements of the Spanish right twisted his arm.” Thus, he has questioned whether 2023 will be the year in which “those who rule in the right close the window” to Feijóo, as they did with Pablo Casado, after verifying that “he does not measure up”.

2023 will be a “momentous” political year

On the other hand, Bolaños has stressed that after a “magnificent” 2022 due to the effectiveness of the Government’s measures in the face of the crisis, Spain faces a “momentous” 2023 in the political sphere due to the elections –autonomous and municipal in May and general in “November or December”– that will decide if the country continues advancing or “stops dead and goes back” with a government “of the right and ultra-right.”

“In 2023 it will be decided if we want a government that makes policies for the majority at the cost of a small effort by the powerful, with economic growth in Spain that is redistributed fairly, or we want a government with unfair policies”, he elaborated, adding that advances in understanding are also at stake, dialogue, rights and freedoms.