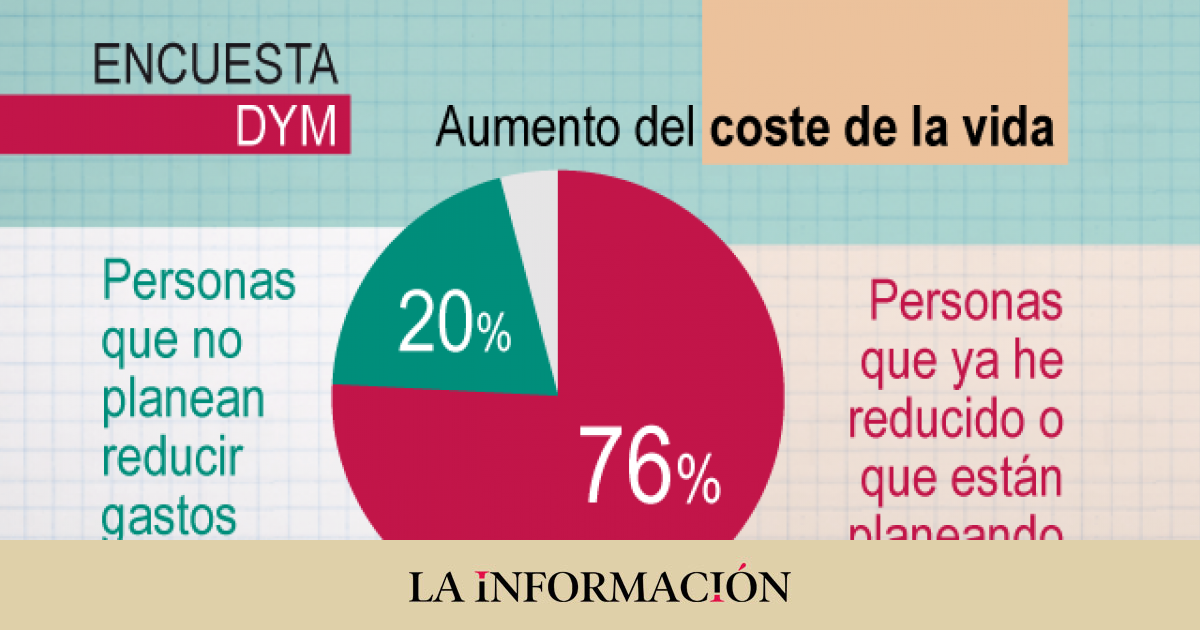 The DYM survey on the cost of living, which is part of a global study carried out by WIN, reveals that 76% of Spaniards had to cut expenses during 2022 or plans to do so in the coming months. Almost half of the citizens surveyed claim to have carried out some type of cost reduction, while close to 30% are considering doing so in the coming weeks. By population sectors, the unemployed are the ones who have reduced their budget the most (53%)followed by retirees (52%) and people without training have acted in the same line, since 50% have cut expenses.

In addition, the survey shows that the perception of the personal financial situation varies substantially by age group. So while 40% of the middle-aged population, aged between 45 and 65, claims to face difficulties making ends meet, only 28% of retired people admit to being in the same situation. In fact, in most age groups this is the majority feeling, while among those over 65, the most frequent response is that they do not live comfortably or with difficulties. Adults over 45 years of age also agree with this answer, however, the difference between those who claim to have a bad situation and these is only one percentage point.

The DYM Institute conducted a total of 1,006 interviews between October 19 and 23, when inflation stood at 7.3%, almost two points above the price index in December. Then, only 25% of the citizens asked said they lived comfortably and most of these have a master’s or doctorate. On the other hand, only two out of every ten citizens with primary or secondary education state that they are in this situation and only 26% of those who have a university degree.

If we look at the occupational situation, the data is devastating. 40% of part-time employees, 37% of domestic workers and 36% of students admit having to make efforts to meet their expenses, which shows the existence of poor workers and that a significant percentage of the population is in a situation of risk of poverty. The data is more positive among full-time workers, however, almost a third of them share these difficulties.

The pattern is repeated internationally, 48% of those surveyed had carried out spending reductions at the time of the survey and the most affected group were adults over 45 and under 65 years of age. In addition, another 29% are considering doing so in the coming months, which includes 34% of the youngest (between 18 and 24 years old), which is the group that had reduced it the least until October. There are no strong differences between men and women.although women have cut more expenses than their peers in the global comparison.

Asia-Pacific as an exception

In a year marked by the conflict in Ukraine, which has added to the wake of the consequences of the pandemic, the evolution of the different regions of the planet in this matter seems similar. With the exception of Asia-Pacific, where 25% maintain that they have neither made nor plan to make changes in their spending levels, compared to 16, 17 and 18% in the Middle East, America and Europe and only 12% in Africa. Precisely, in these four areas, more than 50% of the population has cut its budget.

By country, Greek and Irish citizens are the ones that have been most affected by this situation, since 70% have reduced some expenses during 2022, compared to 19% in Japan. In Lebanon, after the brutal explosion of 2020, 63% of its inhabitants have introduced these changes, while in Argentina, with soaring inflation, 62% has done so. The United States reflects very similar levels to those of Spain, since 50% have cut their expenses and 23% planned to do so in the following months.